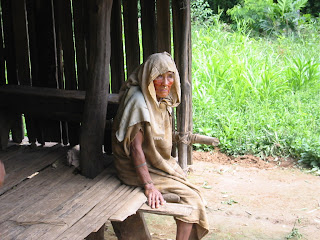 Check out Indian Country Today's recent three-part series on the Camisea Project. Reporter Lisa Garrigues visited communities in the Upper and Lower Urubamba as well as Quillabamba and reports on the conditions in the Machiguenga, Yine, and Quechua communities.

Garrigues offers an in-depth report on the changes in health, nutrition and culture in indigenous communities since the project began.

Dr. Meliton Concha, director of indigenous health for the Quillabamba region, attributed the deterioration of Machiguenga health directly to dietary changes brought on by gas company activities. ''Before, there were fish and birds in abundance. Now the rivers are impoverished.''

Ciro Miranda, of the nongovernmental organization CEDIA, said the money negotiated in river access deals with Pluspetrol for three-year river exploration rights, which can range from $10,000 to $89,000, is minimal for the needs of the communities. Pluspetrol requires that the community present a project to them before they will disburse the funds. The projects don't always immediately alleviate malnutrition.

The series discusses some of the cultural impacts on the Machiguenga communities:

The buzz of helicopters, the churning waters of transport boats, the gas leaks that caused fish to die and skin to burn have been continual reminders in this territory that was once exclusive to the Machiguenga and other peoples.

Part 2 mentions health problems that have intensified since the project began including respiratory disease, diarrhea and syphilis.

In Part 3 of the series, Garrigues writes about what the government and companies have done to silence public criticism of the project including: cutting the budget of the Defensoria del Pueblo and thus forcing it to close it's office in Quillabamba; paying off media to slant coverage of the project; and shutting down a local television station that ran an investigative story about the project.